April has been a busy month for gaming.  Being furloughed has its advantages for gaming time! Gaming also helps as it keeps me busy and I’m finishing more games and ticking a few more off my backlog (sort of… we have just got game pass so I have a few more ideas for games I want to try out).

I have to start by mentioning Animal Crossing New Horizons (Nintendo Switch).  I’m playing this in a very casual way. Whilst I hear and see a lot of people already with beautiful islands and fully upgraded houses and so on I am pretty far from that.  I have been doing a bit of fishing, fossil collecting, bug hunting and flower tending. I have the upgrade to the residential services tent to an actual building now so I also have Isabelle which makes me happy.

As some of you noticed on stream I played through Unravel Yarny Bundle (Xbox One) and so finally checked Unravel and Unravel 2 off my backlog. 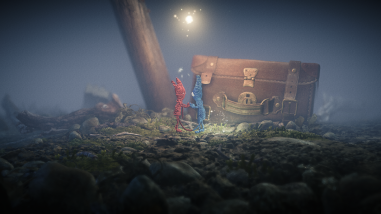 Of the two, my favourite was the first game. It was emotional and beautiful. There is a lot of frustration at certain parts (like pulling a lantern up a slope in the wind) but it’s well worth a play.  Unravel 2 allows for co-op which I still haven’t tried out but you can play on your own controlling Yarny and the Yarny friend he has this time. I can safely say the final section would be one I would be trying to leave for someone else to do if I played this again!  I had quite a few falls and in other sections I sometimes ended up in giggles.

I have been delving into my back last month and early on I finally started Murdered Soul Suspect (Xbox One).

I believe I got this free on Games with Gold years ago.  The first time I saw a demon was an interesting experience, let’s just say I got a bit of a fright. After that initial shock I did carry on until the end. There are so many collectibles and ghost stories and despite thinking I was doing well for collecting them I had plenty left at the end.  I think my best bet to get the full story from the notes and the ghost stories would be to follow a guide as there are 242 collectibles and 8 ghost stories which have a number of things to collect to complete each one varying from 7 to 16 items. It’s a lot to find but they were interesting if you did spot them.

What can I say about Zoo Tycoon: Ultimate Animal Collection (Xbox One)?  This has very quickly become one of my favourite go to games for some cheerful music, nice interactions with animals and all round fun, relaxing time.  I have been working my way through some more scenarios on stream recently. I love it and it’s great to chat whilst playing. It is so worth playing and I don’t think the interactions with the elephants will ever get old.  Sometimes you even feel the need to go rawr when chat suggests it.

A game that I’m unsure about is Subnautica (Xbox One).  I think it’s great that you can explore but I got frustrated about the running out of oxygen really quickly.  I didn’t realise it was so short and then I kept running out and given you drown it was a bit stressful.  I did end up heading online and finding out about using the Developer console and with that Oxygen doesn’t become an issue.

I did also play a couple of quick games.  I picked up 36 Fragments of Midnight (PS4) and Access Denied (PS4) quite cheap.  36 Fragments of Midnight is a fun indie platformer where you are a cute little square who goes out to collect 36 fragments and return to the starting position.  It’s simple to play but at times hard to manage to make the right distance of jump. Again Access Denied is quick but I was pretty frustrated at times. It’s a puzzle game with 36 puzzles to solve.  However, some of the puzzles I found hard to understand what you were meant to do. There should be a logic to it and I just couldn’t work out what that logic was for a couple so had to Google. Even after seeing the solution I couldn’t understand why that was the solution. Though perhaps playing it late at night is part of that reason but to me it was unclear. Also using the PS4 for this and as such the controller is not ideal. I’d imagine it would be similarly tricky with the Xbox controller as any puzzle that involved turning a dial meant I struggled.  Though for you trophy hunters out there they are 2 easy platinum trophies!

I am still (very slowly) playing Assassin’s  Creed 3 (Xbox 360). I sort of stopped earlier on in April as I felt like playing other things.  At some point I will head back to it especially with Assassin’s Creed Valhalla recently being revealed so it is making me excited about the series again.

I did, at the suggestion of Spider-Dan aka nowisgames, pick up the Spider-Man (PS4) DLC in the sale.  I ran through it pretty quickly as I just wanted to see the rest of the story. Now I’m watching Dan work through New Game + on Ultimate difficulty and I’ll decide later if I wish to attempt that as well.

Another backlog game that I picked up originally on Games with Gold that I started this month is Outland (Xbox 360).  I didn’t play much of this before getting distracted so I can’t really comment on it but I did start it which is an improvement. The imminent threat of being eaten by a dinosaur seems to be a tourist attraction in Jurassic World Evolution (Xbox One).  So I replaced the animals from Zoo Tycoon with dinosaurs. It’s a different spin on the same sort of game and I’m enjoying it.  Though it is a bit tougher than Zoo Tycoon as you have the threat of guests being eaten and have to deal with electrics to ensure power to all buildings.  I’m currently on the delightful sounding Isla Muerta (Death Island) which is not going too well. A slight issue with money running out and not completing enough science, entertainment or security tasks or their missions.  I started a sandbox island recently and I ended up with an amazing tourist area but nothing else. It’s basically a straight line with souvenir shops, food and a hotel. Eventually I will fill it out with dinosaurs and research centres.

A major game series that I have started recently is Uncharted.  I have now worked my way through the first two games as part of Uncharted: The Nathan Drake Collection (PS4).  It’s wonderful to work my way through but Nathan Drake really needs to be nicer to Elena and Chloe.  I did enjoy this moment of accidentally jumping off a building.

One of the best games from this months selection was Untitled Goose Game (Xbox One). This was such a laugh and so fun to do on stream.  I like being a troublesome goose it seems. The villagers tend to disagree. I have a couple more items on the to do as well list and then I could attempt the speed runs even though those are really tight time wise.  Though I have heard from a reliable source that you can do it.

Picross S4 (Nintendo Switch) came out this month and I love Picross games.  I have been working through these and currently am around 75% done with the regular Picross puzzles.  There are other modes which I will be moving on to afterwards.

Finally, the last game I played in April is Outer Wilds (Xbox One).

So I only just started it and I love the music for it. It’s a beautiful world.  Though I did get a bit disorientated when I first managed to get to the bit where you can fix the satellite in the Zero G cave.  I was finding it difficult to gauge the boosts and directions and then I hit off the sides and just started spinning. I had to quit and restart because I couldn’t work out where I was or what direction I was trying to head in.

There is my selection for April.  Considerably more titles played than normal and I have streamed a good selection of them! What have you all been playing recently? Let me know in the comments.