The last game I played and completed in 2017 was Layton’s Mystery Journey: Katrielle and the Millionaires’s Conspiracy. Is the game a worthwhile successor in the Layton series?

At first glance this game follows a similar pattern to previous Layton games. Essentially puzzles, puzzles everywhere. Proceed by solving puzzles, earning picarats and collecting hint coins. Whilst hint coins are not necessarily a requirement they are highly recommended for when you come up against more difficult puzzles. So, as previously, when exploring an area you can find hint coins as well as puzzles. Picarats are what each puzzle is worth if you solve it and if you get a puzzle wrong the number of picarats you receive when you do solve it is less. The picarats you are given as a reward for completing a puzzle is intended to relate to the complexity or difficulty of the puzzle, however depending on the sort of puzzles you find easier this may not be the case.

Now that is all nice and familiar, the art style is too. However, there have been changes in this game. For the first time in a Layton game you could also buy it for your smartphone for iOS and Android. I can’t comment on this version as despite the smartphone version being released earlier I prefer to play this as I have previous titles on the DS/3DS family of systems. Personal preference, of course, but there is also this option should you wish to play it. There may be slight differences between versions, however I won’t be covering these.

An obvious difference is this game follows Katrielle, Layton’s daughter and private detective, as her agency is opened and she solves mysteries around London. She is joined by her assistant Ernest Greeves, a young man desperate to impress Katrielle, and Sherl the talking dog who has amnesia (named for Sherlock Holmes, full name Sherl O. C. Kholmes). Sherl is only understood by Katrielle and Ernest and provides insight and comments as only a talking dog can. Who Sherl is and his background isn’t resolved by the end of the game, but he is a nice member of the team.

In this game there are several options for customisation in Katrielle’s fashion and in the office. Nice touches but I’ll admit that I didn’t spend too much time on this past a few tests of what it would look like if I chose this or that.

This game splits the main running theme into twelve separate cases rather than one story into multiple chapters. The quality of the cases differs in my opinion. Some of the endings are very predictable but the investigations are enjoyable enough. My favourite cases focused on Pipper Lowondina, Ernest, Katrielle and Inspector Hastings. Though this could have been due to the characters themselves. 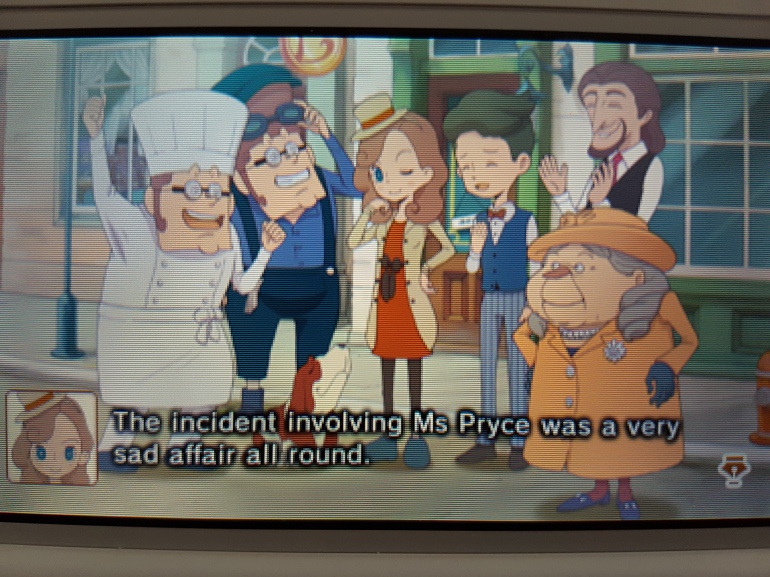 Movement between areas is either by walking (selecting a circle on the map that is opened up) or by bicycle for areas further away (select the bicycle, the area you want to move to and move there). Simple but it works. It isn’t anything overly imaginative or involved but it is easy to see where you can travel.

I do have to mention the names. NekoJonez at NekoJonez’s Gaming Blog has previously mentioned this in his review of the game. There are quite a few pun based names. Seymour Frames, a protectionist at the cinema, Keane Fisher, a fisherman, Grant Sloanes, a dragon and owner of a bank, Dr Gene Ohm, a genetics researcher… I could go on. Some are ok but some just seem a bit too much. It becomes like they are trying too hard with it. Personal opinion, of course, but this just seemed to be a bit much sometimes.

There are Bonuses that you can access. Puzzle Index, Kat’s Conundrums, Top Secret and Daily Puzzles. Top Secret unlocks with more Picarats so try to end the game with as many as possible. For example, these unlock some Art Files and Music Files, amongst others. A nice touch for some extras to have a look at or listen to. Kat’s Conundrums allow you to have a play through some challenging puzzles.

Within the game there are mini games, Ideal Meal, Passers Buy, Hound in the Pound. Ideal Meal asks you to cook an ideal meal for a diner based on information they provided and information from witnesses. You need to open up more options for food to find the ideal meals. Passers Buy is a nice little set of logical puzzles which requires you to place accessories so customers buy as much as possible, ideally everything in order to complete the level. Hound in the Pound wants you to help Sherl escape the Pound by using switches to move blocks. These can be fun extra puzzles.

I enjoyed my time with this game. This is a fun game with lots of puzzles to enjoy and work your way through. The art style is lovely and the cut scenes and case codas are so nice to watch. It is a departure from the standard Layton game whilst still being a nice addition. If you like puzzle games I would recommend it.

Have you played Katrielle and the Millionaires Conspiracy? What did you think of it? Let me know in the comments.

5 thoughts on “Katrielle and the Millionaires’ Conspiracy: A Review”